The Doctor Who Random Story Generator 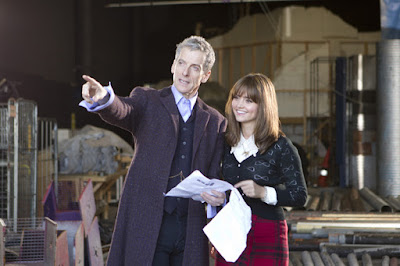 The Doctor Who Random Story Generator!

It really works, folks! (Sort of!)

This is by no means complete, nor in the right order. Feel free to use any of this in any old order you fancy.

If we can agree that the essence of a good Doctor Who story in any genre or format consists of:

A) The plaiting of strong narrative strands pitching one or more groups of heroes against one or more group of villains and monsters; B) bold visual imagery involving contrasts and juxtapositions and C) slightly wonky allegory

There needs to be two locations, with perhaps two or three rooms in each, and some inbetween place. There must be a strong contrast between all three. So: an Elizabethan manor house, a desert, a space ship. The Roman Forum, an asteroid belt, a blue swamp on Venus.

You must have a group of humans who live and work inside a hierarchy and wear uniforms accordingly. Soldiers, servants, colonists. Most stand in the background nodding in early scenes and their leaders fill in exposition about who and what and where they are. Revolutionaries and malcontents are a good thing to bring in here.

When the Doctor and Companion(s) arrive he gets to talk to both the highest and the lowliest in the land, classically sympathizing with the put-upon and the lowliest. (A good twist is when this turns out to be the leader.)

Take something from the news or popular consciousness. Global climate change, transsexuals being abused by Germaine Greer, the refugee crisis, etc. Map this onto your story about aliens quite obviously at the start, but end up trying to disguise it as your story gets out of control and has you saying all kinds of odd things you don’t really agree with.

Choose a favourite old story to follow and subvert: a Gothic tale, a Golden Age Mystery, a Shakespeare, a Greek Myth, a classic SF film or a Puffin classic of the 1960s.

Best if a Companion has a flashback trauma early in your story, either from a previous story, or their childhood. This will come in useful for giving your runaround finale more resonance.

The Doctor’s developed a new quirk: now he plays the triangle, plays with his yo-yo, is a bird spotter. This will come in useful too, before the story’s out.

At the heart of your story place something that’s to do with juxtaposition. Something strikingly visual. A giant whale with the head of a baby. A department store stranded alone on a world of ice. A theme park of cartoon characters in Dante’s Inferno. That kind of thing. Something that plays with scale, time, sense or genre distinctions is good.

Obviously, in terms of working through the story, there needs to be the elements everyone knows:

Exploration / capture / bungled escape / recapture / escape / bungled recapture / discovery of a mystery / a corpse / a frightening state of affairs / someone who shouldn’t be there / an anachronism / a puzzle / aliens in disguise / a spooky factory. And then we must see the Doctor standing up to brutality and discover an enigma that only he half-understands as yet. (He might be pretending and completely understand it, or not understand it at all. This depends on which Doctor it is. Some might have already been to the end of the story and sorted it all out already, making them a manipulative weirdo, and others might not even know what day it is yet.)

Now they must meet a new, slightly tragic friend who takes them to meet his/ her people, who warn about all the dangers, and then there’s an attack, the Doctor is curious despite the dangers and goes to meet the enemy. The new friend goes with him, leaving the Companion(s) behind. After a number of exciting events the new friend dies nobly and tragically. The Doctor swears never to forget him / her, and promptly forgets him / her.

The Doctor is captured by the enemy, doesn’t even try to escape, generally larks about until they show him their doomsday device which, depending up the relative sophistication of the story, can be either a machine that looks like a teasmade or a long, impossible explanation of the whole season’s accumulated storylines. The Doctor will stare in outrage and slight bafflement either way.

MORE THINGS TO PUT IN:

A creature that is made of:

bits of insect / bits of metal / bits of fur / scales / suckers / tentacles / bones / rocks / corpses / gelatinous stuff / baked beans, or any combination of the above. Mostly they’ll just say ‘raaarggh’ and lumber about. For added comedic effect give them a funny voice or an entirely reasonable manner. For added sophistication, give them a long speech about the whole season’s accumulated story lines.

Put in an interesting mode of transport for taking the Doctor and friends between one location and another – a tube train through the time Vortex, a escalator through the clouds, a soil pipe.

Have them escape from the base / city / whatever and reveal a completely unexpected new location. Involve a shift in scale or perspective or context. Eg, ‘So we were inside a vacuum cleaner / 17th Paris / Freud’s mind… the whole time!’

There must be a ticking clock. Or bomb. Or teasmade. Do not defuse it until the numbers are down to single figures. Keep all your characters running towards it.

The Doctor has a vital piece of information that he reveals once he gets to the teasmade. This ought – for the sake of story clarity – to be something he has learned within this story. Or, if you want to delight fans – it could be something no one’s mentioned since 1974.

The twist at this point, as everyone watches the teasmade, might be:

The villain is a hero / the helpful friend is still alive and a traitor / the villain reveals a backstory nugget that makes things more morally complicated and we start to like him or her a bit / or the hero does something assholish just at the wrong moment.

Or, someone from 1974 comes wandering in, completely unexpectedly.

You are allowed three interviews between the Doctor and your villain: 1) the villain triumphant, boasting and giving too much away. 2) A meeting of equals, in which the villain falls for the Doctor and offers to share power with him and the Doctor strings them along for a bit. C) The Doctor defeated and gradually, gleefully reversing the situation.

Petard Hoisting. The Doctor does something awful and downright fitting to his enemy.

All are moving towards the same setting for the climax / denouement / wordy explanations. Say, throne room, top of an office block or the centre of the maze. Everyone tries to trip each other up in getting there. (Friends try to save each other / heroes try to prevent villains reaching the doomsday teasmade / villains use heroes as landmine sheep.)

The invading monsters are invariably revealed to HAVE ALWAYS BEEN HERE.

The space-colonising humans have ALWAYS BROUGHT THE BEST AND WORST OF HUMANITY with them into the stars.

Even though SHITTY THINGS HAPPEN, SOME GREAT GOOD WILL COME. So – don’t muck about with history, even if it’s your Time Lordy mission or some school teacher gets a fit of conscience.

Any hierarchical system – whether Time Lords, school governors, soldiers or civil servants – is revealed to be rotten at the core. With free stationery comes great temptation.

The best Doctor Who stories are very clever things disguised as something stupid.

And generally, the Doctor is the former while his enemies are the latter.

Long speeches about the trials of immortality or the web of time.

Best if the Tardis is on the blink. A time and space machine that works perfectly well is an awkward thing – for the obvious reasons – in a story involving danger and exciting adventure.

NEVER let your companion say: ‘Can’t we just go back to the TARDIS?’ Your audience might agree with them. Find a way to make it impossible to return until at least the coda.

HANDY GUIDE TO THE STAGES OF A STORY:

Now, the way you make those stages last long enough to last a whole story involves some of the following stuff. Use some of these (but not all, of course. That would be TOO MUCH.)

Cloning, mysterious transformation, horrible botched surgery, apparent death, getting lost, being sent into another dimension, getting whizzed into the distant past or future, becoming a ‘ghost’ (with a rational explanation), being mind probed (or mind-drained or mind-robbed), being locked up, being possessed, being kept waiting for execution, contracting a space disease, getting converted into a Cyberman, being shot into a virtual reality without knowing it, falling in love, or having a dream sequence.

A bad-tempered secondary cast member who loses his or her temper and bellows at the Doctor and Companion(s): ‘You’re wasting your time!’

This happens in almost every story.

It’s your job to make sure that they aren’t. Not one single moment must feel like wasted time or padding. In the world of Doctor Who, every single moment is absolutely packed!  (With all the stuff in the list, above, obviously.)

Also, though being confused during the first three quarters of the story is a good thing, it’s nice if the audience comes to UNDERSTAND IT ALL by the end.