'Callum and the Mountain' by Alan McClure 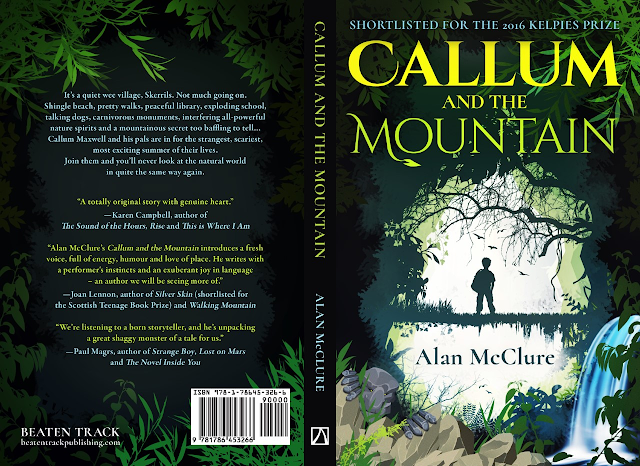 I'm giving some space on my blog today to Alan McClure to talk about his first novel, which is about to be published...

"I have a slight issue with children's books which try to explain every bit of magic and mystery in them. Callum and the Mountain, as well as being exciting and funny (I hope!), is supposed to create a whole in-world atmosphere which leaves a lot of questions only vaguely answered and trusts the reader to apply some imagination. I want it to haunt readers, to pop back into their heads years after they've finished it, and I want the language to leap off the page. I'm a primary school teacher by profession and I've huge faith in the intelligence and judgement of young readers. Despite the march of technology, today's kids still have the access to magic that we all had as children, and I hope this book  provides a gateway for that. Finally, I wrote this as a man who reads aloud to his kids - if you're a parent, I'd love this to be a story shared at bedtime so that you can jump into the peculiar world of Skerrils along with your kids!

Writing is my passion and I do it because I'm compelled to - this became crystal clear during a week long course at Moniack Mhor in 2018, led by Paul Magrs and Joan Lennon and attended by a diverse and talented group of writers. I'm tremendously grateful to them for their encouragement, and for making writing a thing to be shared and not hidden away."


There’s a lovely musical dialect running through the whole of this book, with all these sweet, sparkling, squashy and sometimes unfamiliar words. We get glimpses of a place with its own lore and legends – of Trogs and strange green Things. The second person address means that the book is speaking straight at us, confidentially, with great panache, giving us the feeling that we’re listening to a born storyteller, and he’s unpacking a great shaggy monster of a tale for us.

I love the feeling in the early chapters, that something is turning everything Callum knows upside down and that some ‘sleekit beastie’ has him in a ‘total dwam.’ These sections remind me a little of Edith Nesbit’s Psammead stories, especially when the magic has unpredictable results, like in the brilliant scene when the dog starts talking so politely, and is at such pains to reassure his humans.

There are touches of Susan Cooper, Diana Wynne Jones and Alan Garner, too, when the elemental forces of the Things enter fully into the story. There’s something primal and disturbing about their amorality and their reminder to us that nature isn’t always ‘friendly, or even safe.’

There’s a great zest to all of this book: it reminds us of being Callum’s age, when everything is both perplexing and exciting: ‘another day, another adventure.’ Though it rattles along at a good pace, it’s never at the expense of lovely, descriptive language: especially in the rather beautiful episode, underwater with the selkies. I found that this tale of ‘crazy cavemen, treacherous friends and troublesome nature sprites’ was exciting and rich, but it also wasn’t without realistic jolts of sadness, like when Callum thinks his beloved Papa might be dying.

The book builds to a very unusual, poetical climax. It’s a spartan, lyrical interlude that feels a bit like we’re reading a guitar solo. It’s the bit when our hero is isolated and facing all the forces that his story has unleashed.

Following that, there’s a coda that has a lovely logic to it, as it talks us through the magic of forgetting at the end. Everyone in town seems to benignly remember that something tumultuous has been sorted out, and our heroes have forgotten some of the specifics of their adventures. Yet everyone agrees that the day has been saved by Callum, and this leaves us with a sweet sense of closure.

I really like the inclusion of a glossary, and that description of the way Scots words can be said to spice the English.