The Transphobic Dr Who Fan 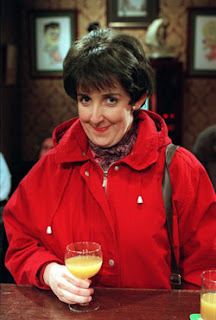 "Furious to see someone on FB - posting a picture of Hayley from Coronation Street - with the slogan running something like, 'Soon i'll be the only bloke left on the Street.' For those who don't know, Hayley's the first transsexual character in a British soap and has been in the show for over a decade now. The point is - people feeling ok about calling post-op transsexuals 'blokes' and generally sneering. Like all bullies they make crap, sniggering jokes about things they think they can get away with. They wouldn't get away with racism or sexism, would they? So who can they turn on next..? It makes me livid."

And the person who posted the original joke doesn't care. Amid the flurry of responses from FB friends he suddenly appeared in the thread and basically said that he doesn't care if transphobic humour offends people. He claims to make racist, sexist and homophobic jokes too, without thinking anything of it. Because they're just jokes, right?

I tried to explain that a joke isn't 'just' a joke if it comes at the expense of someone else's feelings and suffering. If it's a joke about spreading and reinforcing any kind of prejudice.

I'm only FB friends with this man to start with because he's a Doctor Who fan. As a mere writer of tie-in fiction I'm way down the list of z-list Doctor Who related bods floating around in cyberspace, but I still get a lot of requests from people who like the show and maybe even like what I write.

So - Doctor Who is my ostensible connection to this person.

I found myself writing:

"The Doctor, sir, would kick your arse for being a bullying, phobic idiot. 'Never cruel, never cowardly', remember? Yet you gleefully admit to posting racist, sexist, homophobic and transphobic jokes to
brighten your day. Somehow you've missed the whole point of the show that you profess to enjoy."

He replied by saying that Doctor who is not real. It's fiction and so we shouldn't take it as seriously as I obviously do. I should learn to laugh at jokes.

"THE DOCTOR IS NOT REAL NOR IS CORRIE"

He seemed amazed that I could believe in the truth at the heart of this show.

The valuable truth in a fiction about a multidimensional traveller who believes in respecting all kinds of people, aliens, creatures, plants, crystalline beings, transdimensional folk made of  anti-matter, seaweed creatures, living rocks, cyborgs, robots, yeti and planets with souls.

And a man who believes in culture and tolerance and science and nature and 'people being terribly nice to each other.'

I really believe that our attitudes to fiction and its characters reveal actual truths about ourselves. That's what fiction is for. That's what it does. Even outlandish fiction like Doctor Who. Even humdrum soaps like Corrie.

We've all got something to learn from it. Maybe about empathy, understanding and listening.

Maybe about how people can be hurt by casual cruelty and unthinkingness.

About morality, too. The Doctor is the most moral of characters.

He truly would, if he existed, go round this sniggering transphobe's house and kick his arse for him. He really would be ashamed of having a fan who revels in prejudices. A fan who then defends himself by saying it's a harmless joke shared by many.

But his outrage at everyday awfulness as well as cosmic injustice is something we should all be trying to make as real as we can.