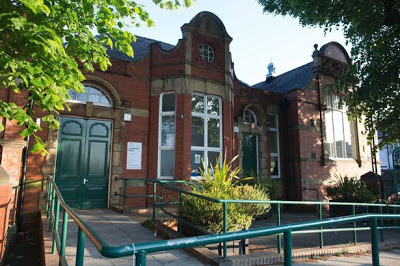 This week has seen the announcement that Levenshulme library has been saved! here's the Manchester Evening News report. I'm so proud of everyone - and Jeremy especially - for making this happen. It's a brilliant combination of ideas and practical solutions. It's a fantastic act of collaboration by everyone involved meaning that the library can stay alive until the new one opens up for business. I think everyone's ending up with more than they bargained for with the way things have turned out - and it's all down to the creativity and commitment of those working on this for the past few months. I've written before about loving libraries - and about the periods in my life when I was borrowing books and records a lot (from the refuge of Newton Aycliffe's small, now-demolished library, or from Lancaster's sweet, ancient town library, or Manchester's grand old Central library, where I sat and wrote every morning for months on end ) and there were other times when I drifted away from libraries altogether. When we lived in Norwich it was terrible - since their central library burned down in the mid Nineties and there was nothing to use apart from the university library (which was never much fun...). Then they opened some kind of Millenium glass-walled nightmare in the year 2000 and it was all open-plan and a bit like a glitzy version of a Poundshop or Dorothy Perkins... 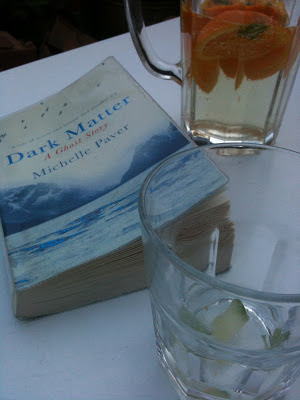 What I like about living round here is that we have the choice between the small and perfectly formed (and reprieved!) Levenshulme library - but there's also Longsight up the road, too. It's quite a different experience - but with a bigger stock and interesting potential for people-watching, it's well worth a visit. It's quite noisy - with all the various impromptu social gatherings going on - and people giving the computers a good clattering - and some solitary, crazy-looking souls sitting on futuristic armchairs glaring at you as you peruse the stacks...  but the staff are terribly friendly.

I've spent the last week devouring library loot. 'Dark Matter' by Michelle Paver is a ghost story I've meant to read for ages. I don't know how I failed to - but anyway - the blazing heat of our back garden was perfect for reading this tale of terror in the arctic tundra circa the 1930s. It's a wonderful book - perfectly judged in delivering its scares and the way it slowly, horribly ramps up the tension.

Justine Picardie's 'Daphne' was something i was keen to read, too - and had forgotten about. It's pretty good. I think it's hampered by sticking too close to the research and the real-life source material. It could be shorter, snappier, and less reverential. And what a terrible bunch of characters! The literary researcher characters in the contemporary bit seem to come from central casting. They're like the same snobby lot that you get in any old novel about literary detective work - not very engaging at all. The real heat of the book comes with the collision of the shady old man who hordes the Bronte manuscripts in his decrepit house in Leeds and Daphne du Maurier's fictionalised correspondence with him. The scene where she actually goes to visit - and he pretends to be someone else and not the man who invited her - is actually quite chilly, uncanny and sad. I wanted more of that sort of thing and less of the tiresomely self-regarding Hampstead brigade, really.

And now i'm on with Stephen Kelman's 'Pigeon English' - which is sweet, slangy, ramshackle and very successful in grounding us in this London council estate. I love the little interludes from the pigeon - these little feathery diatribes at the start of some of the chapters. It reminds me a bit of that tv show 'Mongrels'. Still halfway through this one, where I'm feeling the need of greater forward momentum, i think...  but I'll let you know how it goes.

Seems like the books i was choosing at Longsight last week are things that were from two or three years ago - the Richard and Judy's, the Booker listees and the things that book bloggers were slogging through back then. I didn't see *very* much that was bang up to date - and that's no surprise, given the cuts.

I don't mind being a couple of years behind with this contemporary stuff!

Isn't that what reading's always like? Having that feeling of forever catching up? Which is just another way of saying - thankfully - that we'll never run out of good things to read..? 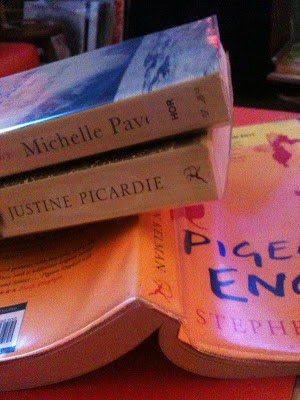