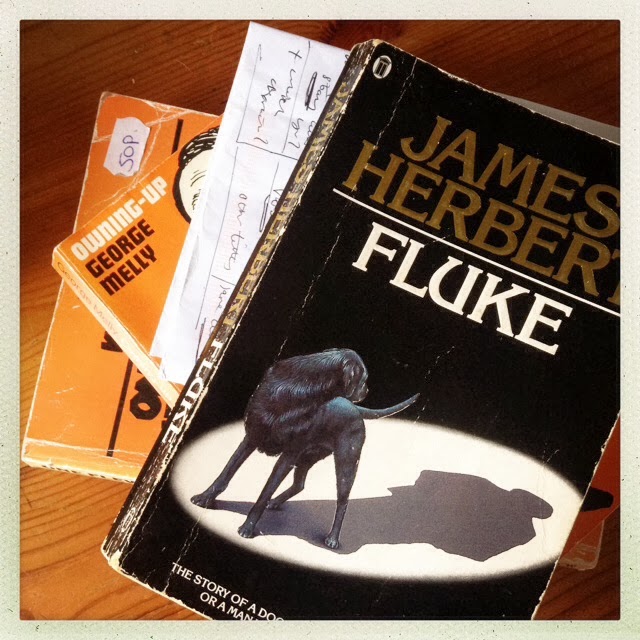 Encapsulate the book in one sentence?

What starts as the episodic life of a super-intelligent mongrel scrounging food and looking for love turns into a quest to solve his own supposed murder by a man reincarnated as a dog.

There was a New English Library paperback on my parents’ wall unit bookshelves ever since the late Seventies and I would dip into it now and then as a kid. I don’t think I read it all, though. I bought my own copy several times over the years, intending to finish it and to thread all the episodes I remembered together. I wanted to know what was going on. The old tagline made it very ambiguous: is Fluke a man who thinks he’s a dog, or vice versa? Actually the book is a whole lot less ambiguous than that. We’re told the state of play fairly early on. But I remembered it being vivid and very well-written. I remember the dog’s point of view being very realistic, and that was enough to make me buy it again and to set it aside for a revisit some day.

What year or edition?

I’ve got a 1987 paperback (as well as a much earlier one, somewhere.) Black cover with gold laminate on James Herbert’s name, making it look very much like a horror novel. The list of other titles by this author has that very endearing thing – tiny ticks in biro by the book’s original owner. They’d read eight out of eleven Herbert novels published by that point. The most recent was ‘The Magic Cottage’, which I remember reading at that time, more or less, in a similar edition, with huge relish.

This copy is inscribed ‘To Carl. Happy Christmas 1988. Dad.’

I loved it. I think it’s his best. The writing is more sensual, grounded, vivid than anything else he wrote. There’s no apocalypse on the horizon but there’s more at stake for Fluke than for any of his other characters. There are wonderful secondary characters, too – which Herbert is always good at. I especially like the psychotic old lady who sets her cat alight, the mentor figure Rumbo, and the wise old badger who tells Fluke a thing or two about Buddhism. I didn’t realise the book was going to get so mystical, but I loved that too.

What genre would you say it is?

It was packaged very much in the horror genre, selling alongside Herbert’s tales of rats and strange, dark powers, but this belongs to a tradition of allegorical animal stories. It’s closer to ‘Watership Down’ than anything else. It’s in a tradition of British whimsy and mysticism and pastoral fantasy perhaps more than it is the Gothic…

What surprises did it hold – if any?

The savagery of some of the scenes, such as the fight to the death with the extra-intelligent rat – and the fact that the rat seems like a guest star from Herbert’s famous trilogy. The whole-hearted embracing of reincarnation, and the fact that it’s a badger who knows and understands the key to all existence (just as one seems to in ‘The Wind in the Willows’, too.)

What will you do with this copy now?

I think I have to keep this. I’m sure I’ll return to it again. If I find my nicer, 1970s edition – the same as the one we had when I was a kid – I’ll keep that, and give this one to someone I think would like it.

Is it available today?

Yes, in print and as an ebook. Herbert’s whole backlist is available very cheaply as ebooks. More or less the same price as they were in 1987.

Give me a good quote:

From the very start, when he wakes up for the first time, and finds himself transformed into a dog:

“The warmth from the sun beat against my eyelids, soft persuasion to open them. Noises crept into my ears then burst through to my consciousness, confusing sounds, a gabble broken by strident pitches.”