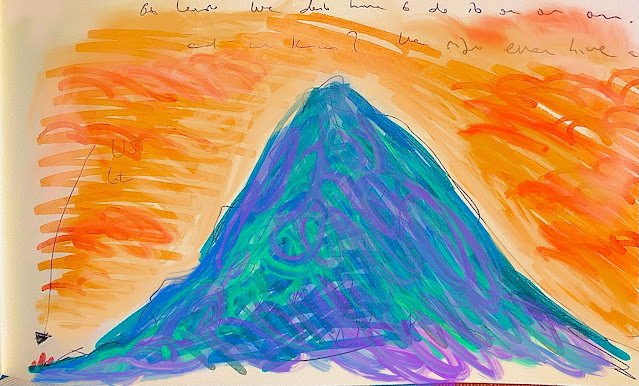 The Hill
Paul Magrs
We’re all going over the hill!
There was talk of going round it, so we could see what’s on the other side, but apparently that’s not do-able. (I’m not clear on why exactly, but anyway.)
So – we’re all going over the hill!
It’s quite a journey, by all accounts! A really arduous yomp! Various reports have come back from others over the years. Some have found themselves in real trouble. Some wore themselves out. Some couldn’t stop bickering amongst themselves. Some of them only got halfway up and then they suddenly went quiet.
A few baulked at the very idea of having to go over the hill.
Why can’t we go under? Why can’t we fly?
Well, we can’t. We have to face facts. We have to go over, step by step.
There’s no doubt about that. No wriggle-room, when it comes to going over the hill.
The weather is unpredictable and it’s foggy much of the time, so you can barely see the peak anyway.
Some people say: Is there even a top of the hill to go over? Can you see it? Prove it to me! Show me it’s worth it!
Well, you have to crane your neck. Squint a bit. Have a look at the scrappy maps and charts other people have left behind.
There!
Sometimes on clear and brilliant days, or by the light of the moon or in the middle of a savage lightning storm – that’s when you see the top.
Oh crumbs. Quite a long way up, eh?
Quite perilous-looking. Impressive, really.
All that way!
We’ve got all that way to go!
So make sure you pick your companions well. No one you can’t abide, obviously. No one who’s going to chuck you down a crevasse. Or elbow sharply past you in their own rush to the top. Or nick your precious supplies. Or chunter on endlessly as you toil your way up.
Remember – don’t pack too much stuff. You have to carry all that gubbins with you. And there’s no wi-fi up there, or anything to connect to, and no sockets to plug chargers into.
You might think you can get your friends to carry your bags for you. Some do. Don’t be soft and go round offering to carry everyone else’s nicknacks. Some folk will take a lend. Just look at them! Bombing ahead! Galloping up the winding path! They’re not looking back… and meanwhile you’ve got all the rucksacks – crammed packed with all their crap and dirty pants and socks and all kinds of horrible things. Typical!
So…
DON’T stop for breathers so long that you lose your nerve. DON’T let yourself get vertigo as you try to enjoy the vista on the less misty days. DON’T get drawn in by the weird, yelping siren song of the yeti. Oh, yes – he’s up there somewhere. That furry get! You know, he EATS unwary travellers! You’ll come across his abominable footprints and they’ll make you shudder with dread and wonder. But hurry on by!
So here we go.
We’re all going over the hill!
There’s no way round it. There’s no avoiding it.
The air’s a bit thinner as you get higher up. Breathe carefully…
Look, maybe I’m dwelling on the negatives a bit much?
Let’s think ourselves lucky!
Yes, it’s tough. It’s not for softies.
But just think.
Think about drinking hot sweet coffee out of a flask and seeing that view. The whole world comes swimming into focus!
Think about having lovely companions with you all that way and the whole world opening up around you.
Just think how it must look from the top!
And they say – from up there – that’s when you see what’s down the other side. That’s got to be worth it, hasn’t it?
Personally I think it’s probably more of the same. I kind of hope it is.
(But it might just be a vertiginous wasteland of yeti crap. Stinky and all downhill. That would be a disappointment, I guess.)
Whatever – we’re all going over the hill – together!
And at least we don’t have to do it on our own.
And who knows? We might even have a laugh.