Doctor Who Novels by Me 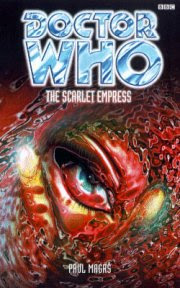 Arriving on the ancient planet of Hyspero, the Doctor, and in particular Sam, set out innocently to enjoy the city which is said to have invented desire. Within no time Sam has stumbled upon a number 22 bus signed for Putney Common, which the Doctor recognises as the TARDIS of a fellow timelord, Iris Wildthyme, a flamboyant eccentric who has had a crush on him for all his lives. After rescuing her from a pit in the desert they join her in her quest for a team of former vigilantes known as the Four, consisting of an alligator man, a cyborg, a bearded woman and a mock turtle. Iris has a mission to bring them to the evil Scarlet Empress, who rules over Hyspero. But why? And what can the Scarlet Empress have that Iris needs so badly?

The Scarlet Empress begs comparison as much with novels of magic realism as with orthodox science fiction. Paul Magrs leaves behind the wobbly sets of the television series and luxuriates in the freedom of the novel form, interweaving seamlessly the comedy and humanity of his characters with the phantasmagoria of djiins and spirits they encounter. The result is a breathtaking romp of a tale which will delight aficionados and newcomers alike. --David Vincent 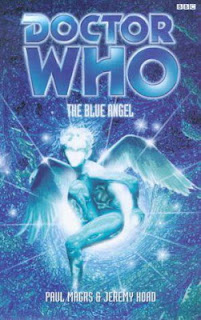 
Tyneside is reverting to an icy wilderness. Three elderly women have come out shopping, accompanied by Icarus -- an orphaned boy who Maddy Sharp found on the beach. She thinks he is an angel -- the son the lost, returned to her. But he claims to be the cause of the dreadful weather... 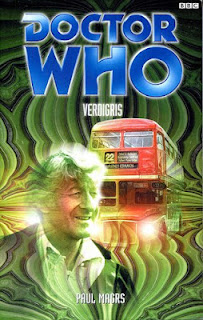 VERDIGRIS
Iris Wildthyme and her new friend Tom visit the Doctor at home in 1973. While out on a day trip, a single carriage materializes out of nowhere, full of comatose bodies in eighteenth century dress. As they arrange for these people to be taken to the hospital, they are watched by an oddly-dressed boy and gift, who quickly vanish. Meanwhile the train passengers die and crumble into a green powder -- Verdigris. 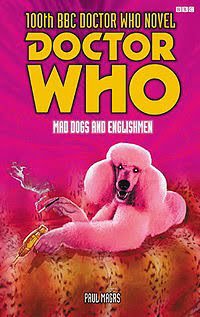 
In the 1970s, a retired Oxford professor wrote a fantasy opus about a world ruled by super-intelligent dogs with hands. After his mysterious disappearance, his wife published the story, sparking a huge industry of sequels and films. The Doctor knew the professor when he first started writing the tale, and knows the story is similar to a real and troubled world. Someone is trafficking contraband otherworldly history, and the Doctor must find out who. 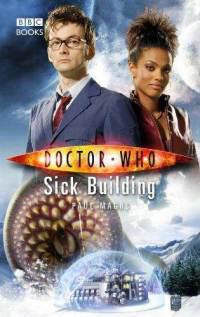 Tiermann's World: a planet covered in wintry woods and roamed by sabre-toothed tigers and other savage beasts. The Doctor is here to warn Professor Tiermann, his wife and their son that a terrible danger is on its way.
The Tiermanns live in luxury, in a fantastic, futuristic, fully-automated Dreamhome, under an impenetrable force shield. But that won't protect them from the Voracious Craw. A gigantic and extremely hungry alien creature is heading remorselessly towards their home. When it gets there everything will be devoured.
Can they get away in time? With the force shield cracking up, and the Dreamhome itself deciding who should or should not leave, things are looking desperate...