'The Daemon Parallel' by Roy Gill 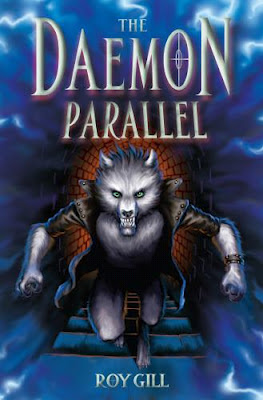 Blurb: “It was over coffee and biscuits that Grandma Ives offered to return Cameron’s father from the dead…Cameron never came to visit his grandma when his dad was alive — and he’s just found out the reason why. Sent to stay with her after his father’s death, Grandma Ives soon reveals their family’s extraordinary abilities, and introduces him to the dark side of Edinburgh he never knew existed — the Daemon Parallel. Cameron is sent on dangerous missions in Edinburgh’s daemon underworld to find the ingredients for an ancient spell that will bring his dad back to life. Cameron befriends a werewolf, bargains with a giant bat-like beast, and struggles to escape the clutches of a powerful spider daemon. But will he survive long enough to finish the resurrection spell? And who can he trust in a world where nothing is what it seems?”
Really good kids’ adventure books with supernatural elements always give away the things their author loved as a child. There are ‘reading footprints’ all over their books. It’s like how we can tell CS Lewis adored E Nesbit, when the witch Janis is transported into 19th century London in an echo of the Queen of Sheba’s adventures in ‘The Magic Amulet.’ And there’s a delicate link from Will’s growing awareness of magic in ‘The Dark is Rising’ that takes us back to Kay in Masefield’s ‘The Box of Delights.’ Kids’ books talk to each other across the generations like this – and I think it has something to do with the magic of how deep those tropes and images are planted when we read them first.
Anyway – this is all to say that when I was reading Roy Gill’s first novel this week, I was delighted by a sense that this was a writer who had read and loved the same things as I do. There were footprints in the snow. Little shivery echoes of Susan Cooper and others in this tale of two worlds – of Daemons and humans – that touch and intersect at certain points in the year. We’re in the genre of liminal spaces between shadowy worlds that only certain children can see and understand. We’re in the world of magic powers shared by kids who have to learn to be brave, and older people who will stop at nothing in their quests for magic and immortality.
Heady, wonderful stuff. Also, all of this rang bells for me, because it is set in one of my favourite places in the world. Edinburgh is conjured brilliantly and beautifully here, and we can really believe in it as a place suffused by magic. Whenever Cameron steps sideways into the Parallel, the world around him alters and shifts and familiar places are strangely transformed. I loved the scenes in the old department store on Princess Street – which becomes a kind of forest cathedral, where antlered beings tend to a sleeping Winter God. All of these moments are touched with the Celticy atmosphere of the Herne the hunter scenes in both Masefield and Cooper – and I just adored them.
There are some wonderful characters here – including Morgan the wolf boy, who lives in an abandoned cinema, and who becomes Cameron’s friend. Cameron’s gran is an ambiguous and magical being – drawing him into this weird world of alternate dimensions. She reminded me a little of the granny in Robin Jarvis’ ‘Whitby Witches’ books – but with a touch, perhaps, of that Mrs Coulter in Pullman’s ‘His Dark Materials.’ This is much, much more readable than Pullman, though, I think. The kids here speak in a wonderfully realistic way – slapdash, slangy and cod-Californian, like kids everywhere.
I don’t want to give much away about the plot. It’s a quest story ranging over the layered streets and stories of the city; a story about returning the missing dead to life, and finding the arcane means to do so, through a series of scary encounters with mythical beings all over the Old and New Town of Edinburgh. There are mythic underpinnings and a mythos that we believe in completely – and we don’t get too much fussy backstory to weigh us down. Also, all the magic isn’t mystical and wishy-washy. It’s all about action and keeping the story moving, and hurtling towards a fabulous climax up in the hills above Holyrood Park.
I adored this novel. I really, really want it to be the first in a sequence. I want it to be a boxed set of novels that are just about falling apart with repeated rereadings. That’s how much I enjoyed this first one.