A Timely Plug for My Doctor Who 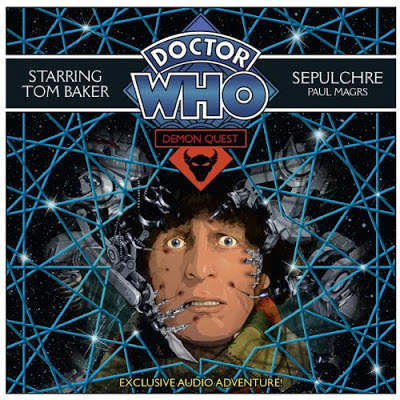 Wasn't the finale to this season's Doctor Who great?

Best episode this year so far, I thought.

If you want to hear *another* story about the Doctor's mind being preserved as a four dimensional atlas of everywhere in time and space that he's ever visited - please do check this out. It's 'Sepulchre', the climactic part of my 'Demon Quest' series produced by Audiogo in 2010, and starring Tom Baker, Susan Jameson and Richard Franklin. In fact - why not go and find this whole series of audio adventures?

I'm still so proud of my stories I wrote for the Fourth Doctor and his Nest Cottage companions. Sometimes I feel they might have been a little bypassed in all the hoo-ha over the TV and also Big Finish's own marvellous audio series with Tom Baker.

However, I simply can't resist using the occasion of the obviously accidental echo in last night's TV episode to give my story 'Sepulchre' a big plug on my blog!

These stories were an outrageous slice of cosmic melodrama on cd and download. Here's a chunk of a scene to whet your appetite...

NARRATION 32
MIKE (NARRATING)            In the sudden darkness around and above us appeared dancing pin pricks of light. Between them, finely etched lines curved through the air like the flight paths of glowing insects. Shining dust motes danced and revolved. The patterns were infinitely complex and vast in number… what were we looking at?

MRS WIBBSEY (HORNET VOICE)            This is what we dreamed of. A multi-dimensional map of everywhere… everywhen!

NARRATION 33
MIKE (NARRATING)            It was like standing in an animated planetarium, one that illustrated a universe in which nothing was ever simple or still. I watched worlds collide, empires fall, great star battles flare up and whisper away. I was rooted to the spot, awed by the beauty and the strangeness of it all. It was everything the Doctor had ever seen or touched or experienced… in one vast magic lantern show. Meanwhile, the man himself was writhing in agony.

MIKE            Please stop. You’re killing him. You’re ransacking his mind and destroying him.